31 REASONS WHY THE GOOGLE PENGUIN ALGORITHM HASN’T UPDATED YET 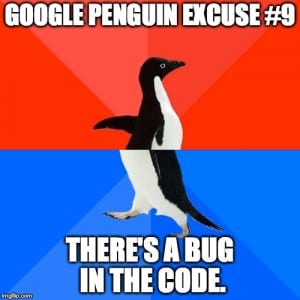 As you probably are aware, Google hasn’t updated their Google Penguin algorithm update in quite some time. In fact, it’s been so long since we have seen an update related to links that we’ve even seen small businesses literally shut their doors as a result. Certainly that’s not Google’s fault at all, but the lack of a Google Penguin update has become quite the joke and frustration for many in the search community.

Back in January 2016, Search Engine Journal reported that Google’s Next Penguin update “to happen within weeks”. Well, as of this post, it’s now been months, not weeks. Google was “aiming for launching penguin this quarter, but we don’t have a more precise timeframe”, according to Gary Illyes.

While we wait for another update, there are a few things that you can still do. We’ve detailed them here on our blog.

1. We missed the opportunity to turn it on during World Penguin Day, so we’ll have to wait another year.
2. We need to hire a few more PR (public relations) people to handle all the questions from the media that we’ll get once it launches.
3. The Quality Raters aren’t done testing it.
4. We’re still trying to figure out how to stop relying so heavily on links as a part of our algorithm. Then we won’t even need a Google Penguin update.
5. We’re waiting for Matt Cutts to come back. Wait. Did he ever leave?
6. There are browser compatibility issues that we haven’t been able to figure out yet.
7. Our lead developer is on vacation.
8. It’s all due to global warming. It’s just not cold enough for the Penguin to return.
9. There’s a bug in the code.
10. If everyone would just stop building links for just one day, we’d have enough time to catch up.
11. There’s not enough data for us to review, we need more bad links to review.
12. We haven’t received enough link spam reports, so we don’t have enough data.
13. The Quality Raters aren’t ready reviewing and rating all of the links.
14. It worked perfectly when we first ran it.
15. We’re still working on the quality of our code.
16. The junior level developers aren’t done documenting all of the changes in the code.
17. Larry asked us to add a feature that wasn’t originally in the scope.
18. There were too many developers working on it, and we had to reassign some to another project with a higher priority.
19. There are other, more high priority development projects that we are working on.
20. We’re working on the rest of the Alphabet code first.
21. There’s just not enough time in the day to get it done.
22. There’s really no such thing as a bad link. Just disavow it or nofollow it.
23. It’s taking longer than we expected for the AI to learn how to determine a bad link from a good link.
24. Rank Brain.
25. We just figured out that all along we were collecting the wrong link data. So we have to restart.
26. We were analyzing the wrong link data, but we’re all good now.
27. We forgot to commit the code that incorporates Google Penguin into the algorithm.
28. We’re waiting for y’all to stop searching, just for a few minutes, so we can turn it on.
29. Google Penguin hasn’t been integrated into the real-time algorithm yet.
30. We found a previously known bug in the code, but the project manager said not to work on it yet.
31. Gary Illyes said it isn’t ready yet. Top 3 Reasons Why Your Website Is Not Showing on Google GOOGLE PENGUIN 3.0 REFRESH: WHAT YOU SHOULD DO NOW